UEX Corporation (UEX:TSX) (“UEX” or the “Company”) is pleased to announce the final tranche of assay results from the winter exploration program on the Company’s 100% owned West Bear Property, located in the eastern Athabasca Basin of northern Saskatchewan.  In January, UEX commenced a drill program at West Bear with the objective of expanding the size of the West Bear Cobalt-Nickel Deposit (the “Deposit”) by extending cobalt mineralization along strike to the west.

The Company completed 126 holes totaling 11,412.5 metres during the winter drill program and the results from these holes were announced in the Company’s news releases dated February 7, March 18, April 1, April 15, April 30, and May 22, 2019 available at www.sedar.com or UEX’s website at www.uex-corporation.com.

The Company also collected and submitted to the laboratory an additional 757 samples from 62 historical sonic drill holes and 12 historical diamond drill holes identified as containing previously unsampled intervals considered favourable for hosting cobalt-nickel mineralization, the results of which are reported herein.  Assays from the re-sampling program were combined with historical assay data to determine new and more accurate cobalt and nickel composite intersections. 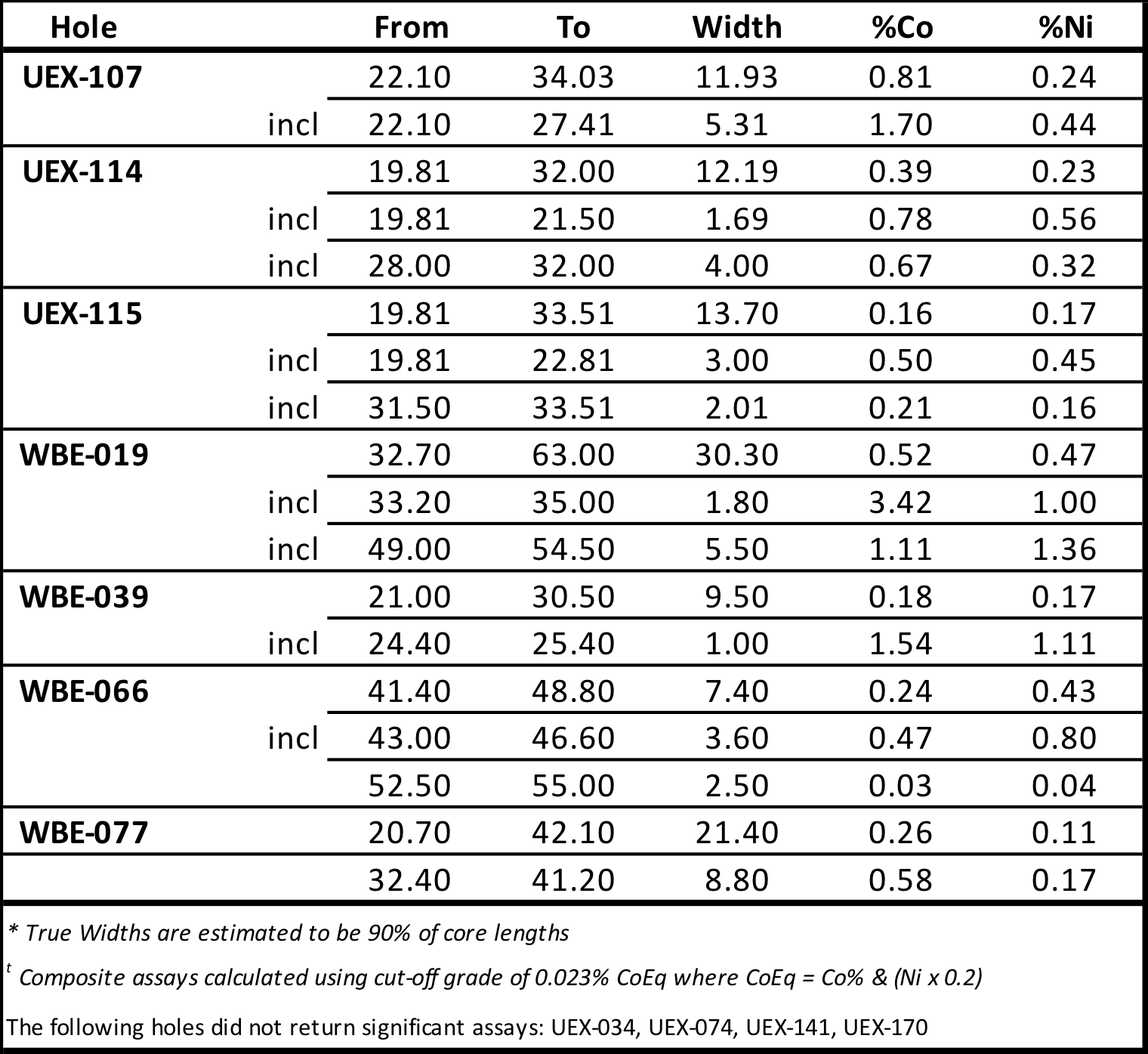 As final results from the winter program have now been received, the Company is in the process of incorporating the results into our geological database and will be completing a new interpretation of the West Bear Co-Ni Deposit.

The West Bear Cobalt-Nickel Deposit currently has a strike length of over 600 m and a dip length of over 100 m. On July 10, 2018, the Company announced a maiden inferred resource estimate for the Deposit of 390,000 tonnes grading 0.37% cobalt and 0.22% nickel, which equates to 3,172,000 pounds of cobalt and 1,928,000 pounds of nickel which does not include any results from the 2019 drilling program. The West Bear Cobalt-Nickel Deposit mineral resources were determined using a cut-off grade of 0.023 percent cobalt equivalent (“CoEq”), using the equation CoEq = Co + (Ni x 0.2).  Only mineralization located within a conceptual open pit was included in the final resource estimate.

Table 2 –Results from the Resampling of Historical Holes 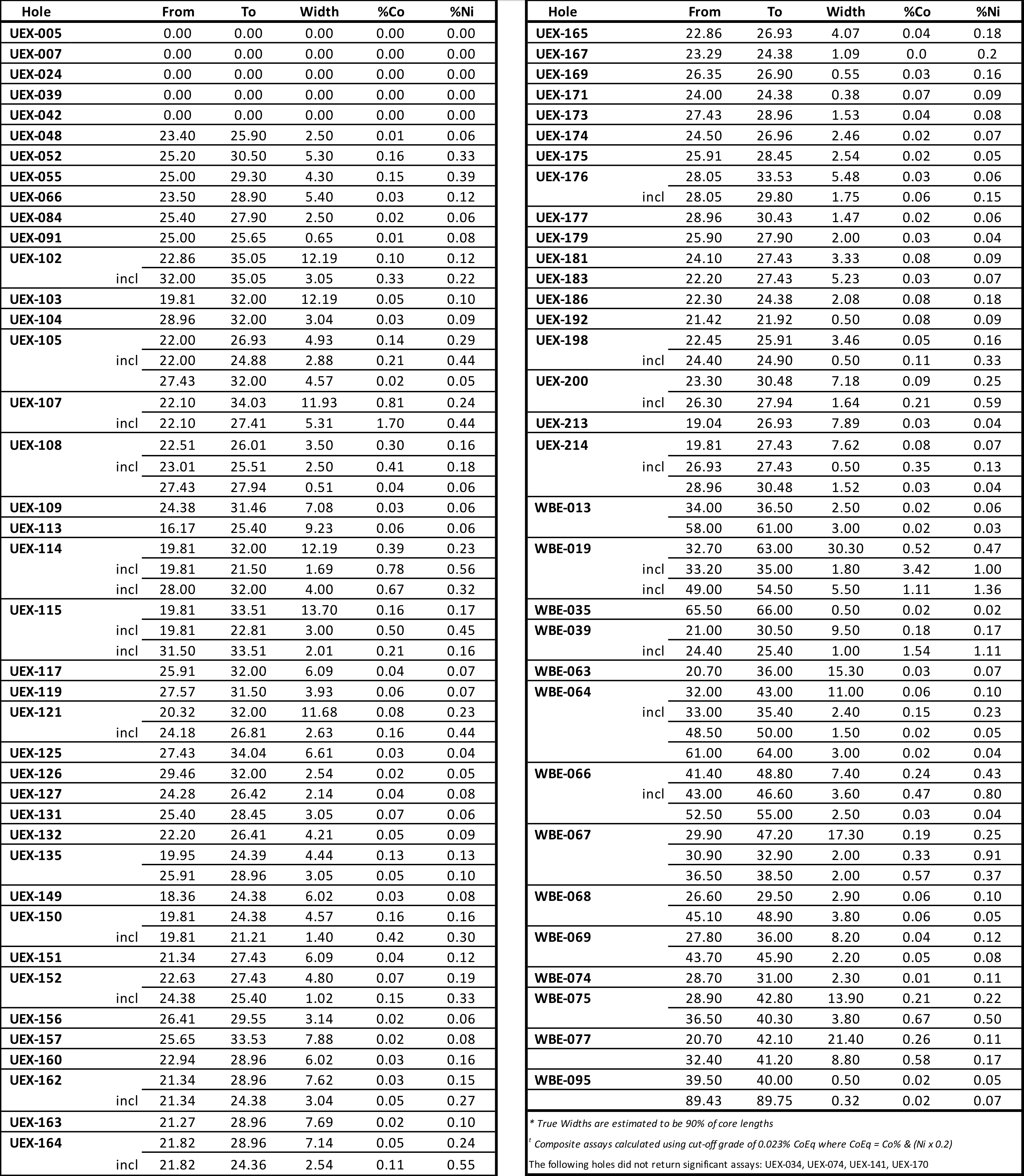 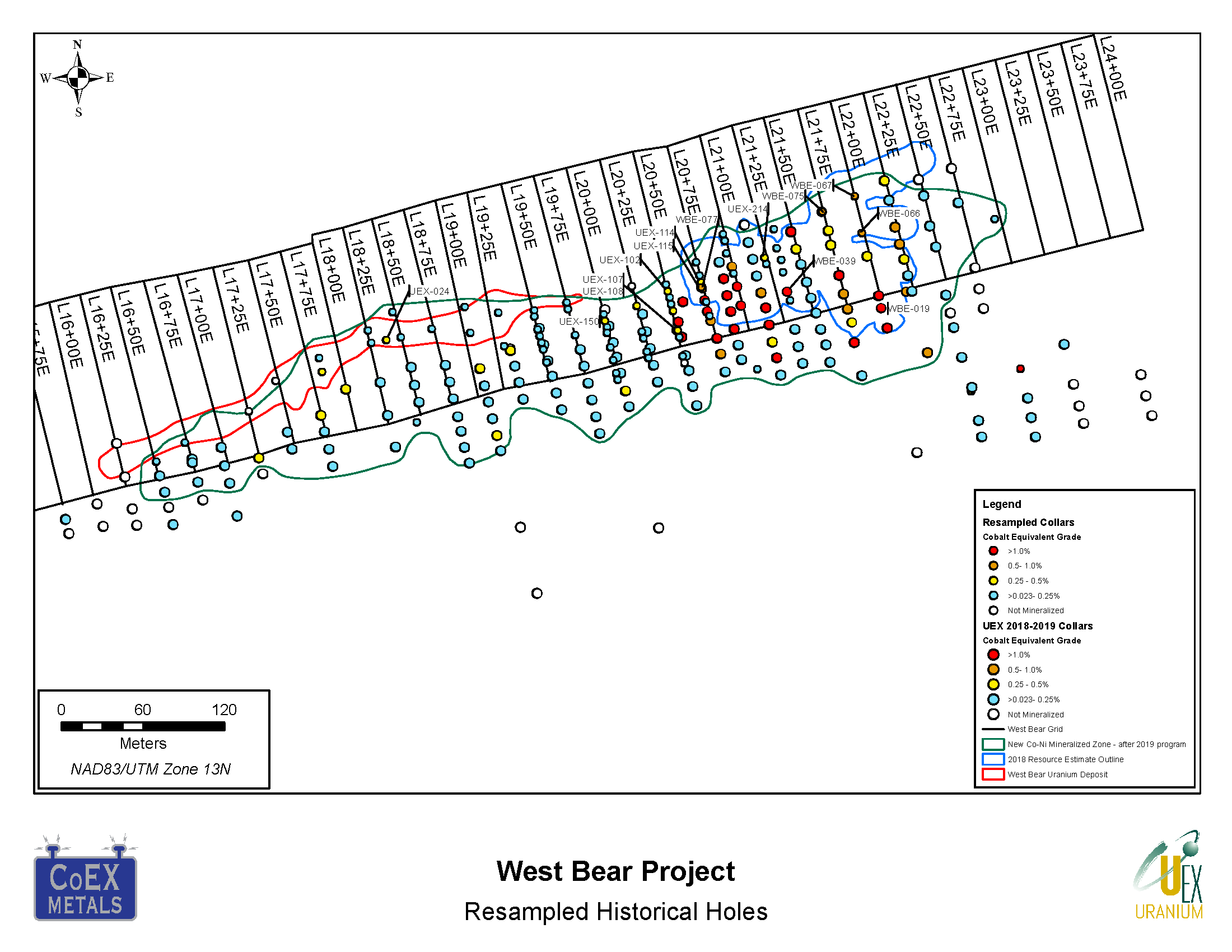