UEX Corporation (UEX:TSX) (“UEX” or the “Company”), is pleased to announce plans to spend approximately $4.25 million on the 2019 winter drill program on the West Bear Cobalt-Nickel Deposit (the “Deposit”) located on the Company’s 100% owned West Bear Property.  Drilling is anticipated to commence in early January.

The 2019 winter exploration program will consist of approximately 17,000 m of drilling in approximately 110-160 holes.  The program will focus on extending very high-grade cobalt mineralization currently defining the western end of the West Bear Co-Ni Deposit along strike to the west.  Drilling will also focus on extending high-grade mineralization down-plunge and along strike to the southeast (see Figure 1).

The goal of the winter program will be to drill the West Bear Cobalt-Nickel Deposit to such an extent that the Company will be able to commence studies to determine the viability of the Deposit in the second half of 2019.

Since completing the 2018 drill program at the Deposit, the UEX team has been reviewing historical exploration results in the immediate area.  Results from UEX’s  2004 – 2006 sonic drilling programs, where holes were drilled 100-500 m west of the Deposit have led the Company to believe that there is excellent potential to expand the cobalt-nickel mineralization along strike to the west.  UEX’s sonic drilling program was undertaken to define the nearby West Bear Uranium Deposit, a classic unconformity-style uranium deposit, ranging in depth from 15-30 m below surface.  The sonic holes were able to penetrate only 5-10 m below the uranium mineralization into the underlying basement rocks.  The key fault structure that hosts the West Bear Cobalt-Nickel Deposit, where mineralization occurs at vertical depths between 18-85 m, remains largely untested by drill holes.  Almost all sonic drill holes completed by UEX along this 500 m strike length encountered cobalt and nickel mineralization that extended below the uranium deposit to the end of the drill hole.  The area downdip of these Co-Ni mineralized holes remains open for expansion and is the highest priority target area this winter.

UEX believes the West Bear Cobalt-Nickel Deposit has potential to develop into a significant cobalt deposit with several potential advantages:

The West Bear Cobalt-Nickel Deposit is located within an area of the Athabasca Basin that has excellent infrastructure.  The Deposit is situated within 10 km of an existing all-weather road and power lines that service Cameco Corporation’s nearby Cigar Lake Mine and Rabbit Lake Operation, as well as Orano’s McClean Lake Operation.

UEX, through its wholly-owned subsidiary CoEX Metals Corporation, commissioned a $1.6 million exploration program in 2018 designed to assess the continuity of cobalt mineralization in basement rocks. The program was designed to follow-up results from 2005 that identified the potential for economically significant cobalt mineralization.  Many of the 41 drill holes testing the Deposit in 2018 were very high grade and expanded the size of the mineralized zone.  The drill program was successful at expanding the West Bear Cobalt-Nickel Deposit which now has a strike length of over 250 m and a dip length of over 100 m and remains open for expansion in all directions.

On July 10, 2018, the Company announced a maiden inferred resource estimate for the West Bear Cobalt-Nickel Deposit of 390,000 tonnes grading 0.37% cobalt and 0.22% nickel, which equates to 3,172,000 pounds of cobalt and 1,928,000 pounds of nickel. The West Bear Cobalt-Nickel Deposit mineral resources were determined using a cut-off grade of 0.023 percent cobalt equivalent (“CoEq”), using the equation CoEq = Co + (Ni x 0.2).  Only mineralization located within a conceptual open pit was included in the final resource estimate.

A sensitivity analysis completed by SRK Consulting (Canada) Inc. within the Technical Report for the West Bear Cobalt-Nickel Project, Saskatchewan, Canada dated August 7, 2018 (filed on SEDAR at www.sedar.com) demonstrates the high-grade nature of the West Bear Cobalt-Nickel Deposit.   Compared to the base case resource estimate, over 96% of the contained cobalt still lies within the conceptual pit shell when cut-off grades are increased to 0.09% CoEq (278,837 t at 0.50% Co and 0.29% Ni equaling 3.07 million pounds Co and 1.78 million pounds Ni).

The eighteen projects are located in the eastern, western and northern perimeters of the Athabasca Basin, the world's richest uranium belt, which in 2017 accounted for approximately 22% of the global primary uranium production.  UEX is currently advancing several uranium deposits in the Athabasca Basin which include the Christie Lake deposits, the Kianna, Anne, Colette and 58B deposits at its currently 49.1%-owned Shea Creek Project (located 50 km north of Fission’s Triple R Deposit and Patterson Lake South Project, and NexGen’s Arrow Deposit) the Horseshoe and Raven deposits located on its 100%-owned Horseshoe-Raven Development Project and the West Bear Uranium Deposit located at its 100%-owned West Bear Project. 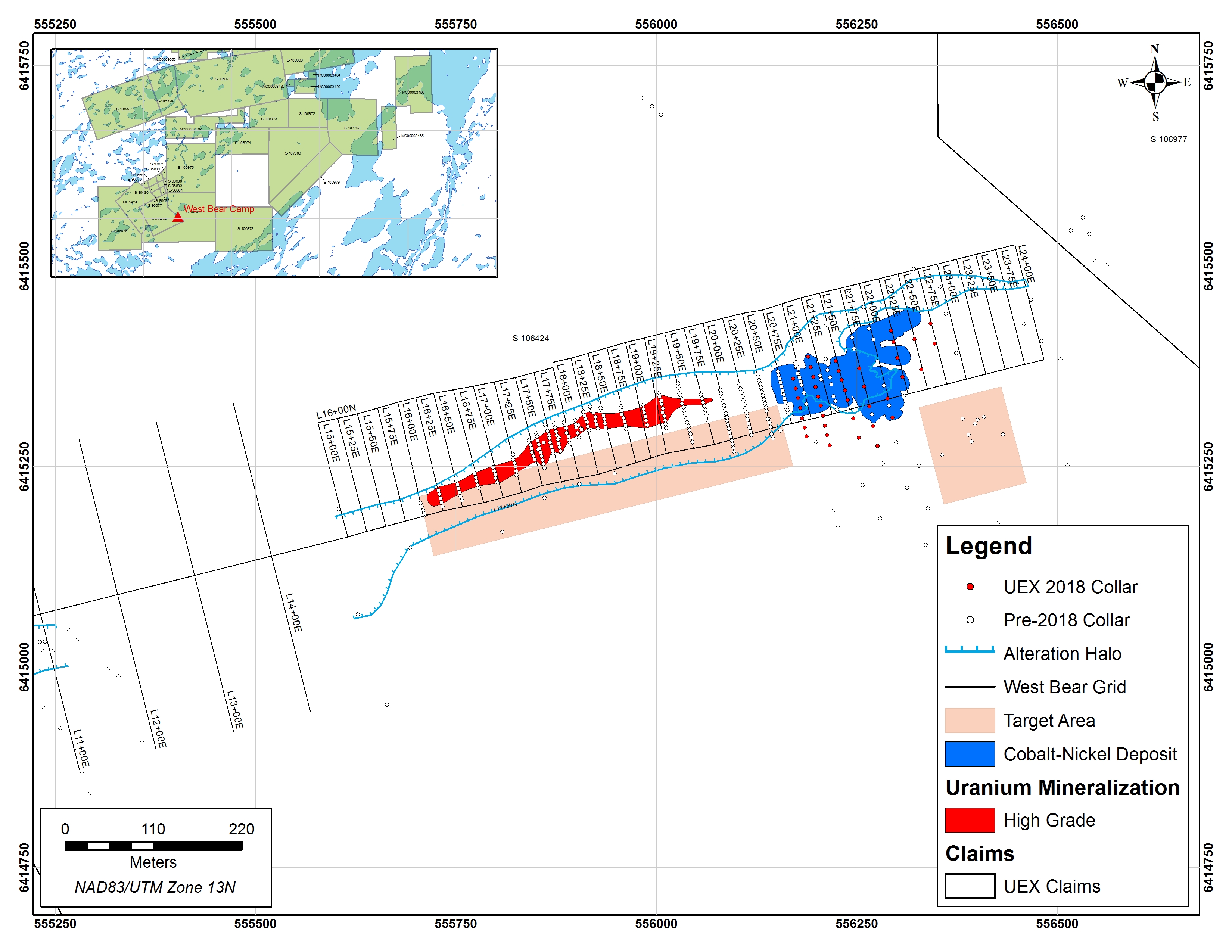