Saskatoon, Saskatchewan, April 15, 2020 – UEX Corporation (TSX:UEX) (“UEX” or the “Company”) is pleased to announce an updated mineral resource estimate for the West Bear Co-Ni Deposit, located on the Company’s 100% owned West Bear Property.  In 2019, UEX completed a 126 hole – 11,412.5 metres drill program that expanded the size of the West Bear Co-Ni Deposit by extending its strike length from 225 to 600 metres.

The updated mineral resource estimate was completed internally by UEX’s exploration team comprising Mr. Nathan Barsi, P.Geo., Mr. Chris Hamel, P.Geo., and Mr. Trevor Perkins, P.Geo. in accordance with Canadian Securities Administrators’ National Instrument 43-101 Standards of Disclosure for Mineral Projects and has an effective date of December 31, 2019.  Mr. Barsi, Mr. Hamel, and Mr. Perkins are employees of UEX Corporation and are Qualified Persons as defined by National Instrument 43-101 but are not considered to be independent of the Company.

The current mineral resource includes the results from 379 diamond drill holes totalling 23,110 metres drilled by UEX in 2003, 2005, 2007, 2018 and 2019 targeting mineralization between 18 and 130 metres from surface.  The reported mineral resource was constrained within modelled cobalt mineralization wireframes and estimated using an inverse distance squared/block modelling approach.  A block size of 5 x 5 x 2 metres for all mineralized lenses was used.  Wireframe modelling, and block modelling were performed using Datamine Studio RM software.

A Technical Report prepared in accordance with National Instrument 43-101 - Standards of Disclosure for Mineral Projects ("NI 43-101") will be filed on SEDAR at www.sedar.com within 45 days. 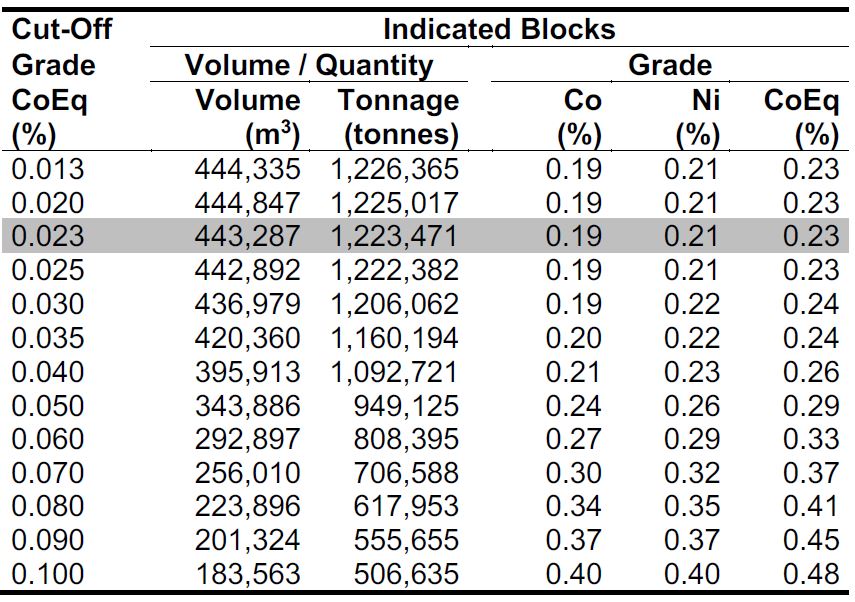 The sensitivity analysis indicates the importance of the high-grade core within the West Bear Co-Ni Deposit.  Even at a significantly higher cut-off grade of 0.1% CoEq, it is estimated that 87.2% of the cobalt and 78.9% of the nickel is still contained within the smaller tonnage resource at a much higher average grade of 0.40% Co and 0.40% Ni.

While our updated West Bear cobalt resource may not be large enough yet to support a stand-alone cobalt mining operation, this discovery is proof that the Athabasca Basin hosts a new and previously unknown type of cobalt deposit. Armed with our exclusive knowledge of these deposits, our historical database, and extensive land holdings, UEX is uniquely positioned to make future cobalt discoveries that could grow the Athabasca Basin into a key strategic cobalt district.

All samples and specific gravity determinations used to calculate the resource estimate were assayed at the Saskatchewan Research Counsel’s Geoanalytical Laboratories and umpire sampled assayed at TSL Laboratories of Saskatoon, SK.  Analytical quality control data was reviewed and validated internally and is considered sufficiently reliable to support a resource evaluation of the Deposit.

The database used to estimate the West Bear Cobalt-Nickel Deposit mineral resources was validated by Mr. Barsi, P.Geo. and Mr. Perkins, P.Geo. and each are of the opinion the current drilling information is sufficiently reliable to interpret with confidence the boundaries for cobalt mineralization and the assay data is sufficiently reliable to support mineral resource estimation.

Results of the 2020 Winter Drilling Program on the Umpherville Prospect

In February and March, UEX completed 13 drill holes totalling 1,314 metres that tested a historical area of hydrothermal alteration and anomalous uranium and nickel concentrations in the Umpherville Prospect area.  The Umpherville Prospect is located approximately 2 kilometres directly north of the West Bear Co-Ni Deposit and was identified as a high priority target area based upon geological and structural similarities to the area hosting the West Bear Co-Ni Deposit,  and includes historical 1977 drill hole ML-77-05 which intersected 0.22% eU3O8 over 4 feet (1.22 metres) (see Figure 1).

The winter drill program was successful in locating and intersecting the North Rim fault structure coincident with the West Bear Graphitic Package at the unconformity at depths averaging approximately 45 metres.  The program substantially expanded the size of the known hydrothermal alteration system within the Athabasca sandstone from approximately 600 metres to a strike length of approximately 1,500 metres (see Figure 2).  The alteration zone is uncommonly enriched in uranium with values ranging from 2 ppm U to 13 ppm U, which are concentration levels often observed proximal to many Athabasca unconformity uranium deposits and the West Bear Co-Ni Deposit.  The alteration system remains open along strike to the northeast and for 2 kilometres to the southwest in the direction of UEX’s North Shore Uranium Occurrence (see Figure 2) where several historical holes have intersected unconformity-related uranium and nickel.

With the expanded hydrothermal alterations system and high uranium enrichment of the sandstone column, the area southwest of the Umpherville Prospect remains a high-priority exploration target for the Company warranting further exploration work in the future.

The West Bear Property is an advanced exploration project located in the eastern Athabasca Basin of northern Saskatchewan, Canada that contains both the West Bear Cobalt-Nickel Deposit and the West Bear Uranium Deposit.  The Property is approximately 740 kilometres north of Saskatoon, west of Wollaston Lake and measures approximately 7,983 hectares comprising of 24 contiguous areas to which UEX has 100% ownership, with the exception of Mineral Lease 5424 in which UEX owns a 77.575% interest.  The Deposit is located within an area of the Athabasca Basin that has excellent infrastructure and is situated within 10 kilometres of an existing all-weather road and power lines that service Cameco Corporation’s nearby Cigar Lake Mine and Rabbit Lake Operation, as well as Orano’s McClean Lake Operation.

The technical information in this news release has been reviewed and approved by Roger Lemaitre, P.Eng., P.Geo., UEX’s President and CEO, Trevor Perkins, P.Geo., UEX’s Exploration Manager, Mr. Chris Hamel, P.Geo, UEX’s Chief Geologist, and Nathan Barsi, P.Geo., UEX’s Project Geologist, who are each considered to be a Qualified Person as defined by National Instrument 43-101.

UEX (TSX:UEX, OTC:UEXCF.PK, UXO.F) is a Canadian uranium and cobalt exploration and development company involved in an exceptional portfolio of uranium projects, including a number that are 100% owned and operated by UEX, one joint venture with Orano Canada Inc. (“Orano”) and ALX Uranium Corp. (“ALX”) that is 51.43% owned by UEX, as well as eight joint ventures with Orano, one joint venture with Orano and JCU (Canada) Exploration Company Limited, which are operated by Orano, and one project (Christie Lake), that is 64.34% owned by UEX with JCU (Canada) Exploration Company Limited which is operated by UEX.

Our portfolio of projects is located in the eastern, western and northern perimeters of the Athabasca Basin, the world's richest uranium belt, which in 2018 accounted for approximately 22% of the global primary uranium production.  UEX is currently advancing several uranium deposits in the Athabasca Basin which include the Christie Lake deposits, the Kianna, Anne, Colette and 58B deposits at its currently 49.1%-owned Shea Creek Project (located 50 kilometres north of Fission’s Triple R Deposit and Patterson Lake South Project, and NexGen’s Arrow Deposit), the Horseshoe and Raven deposits located on its 100%-owned Horseshoe-Raven Development Project and the West Bear Uranium Deposit located at its 100%-owned West Bear Project. 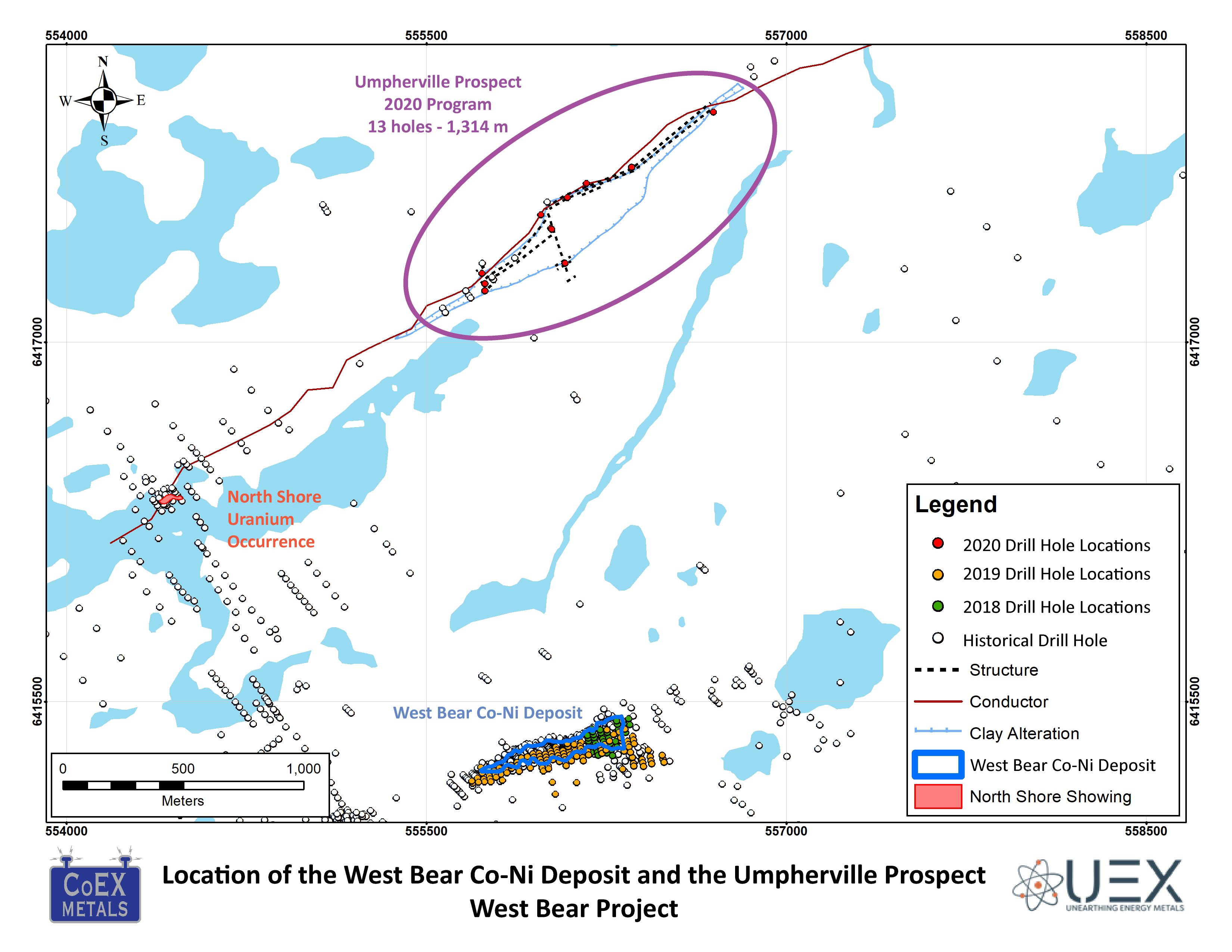 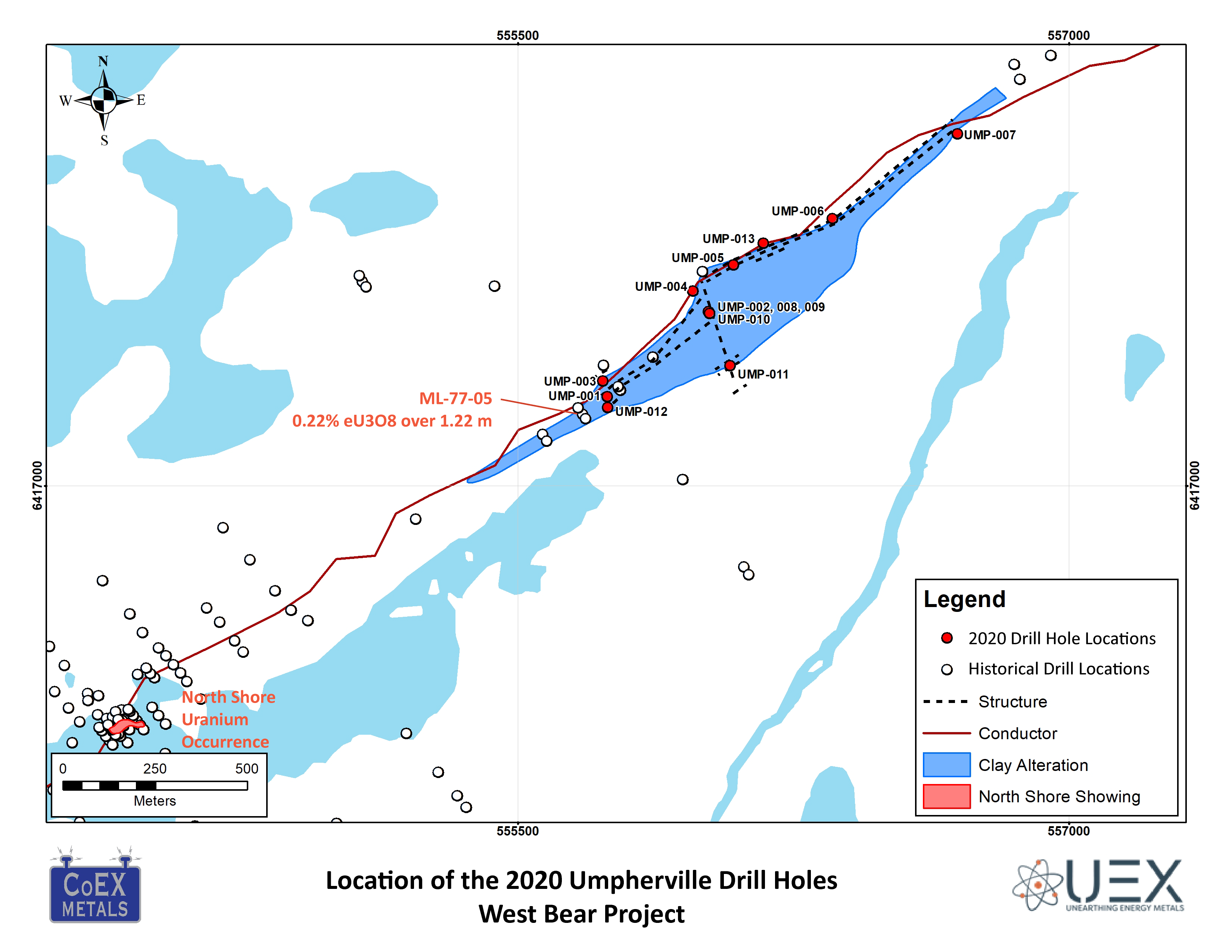